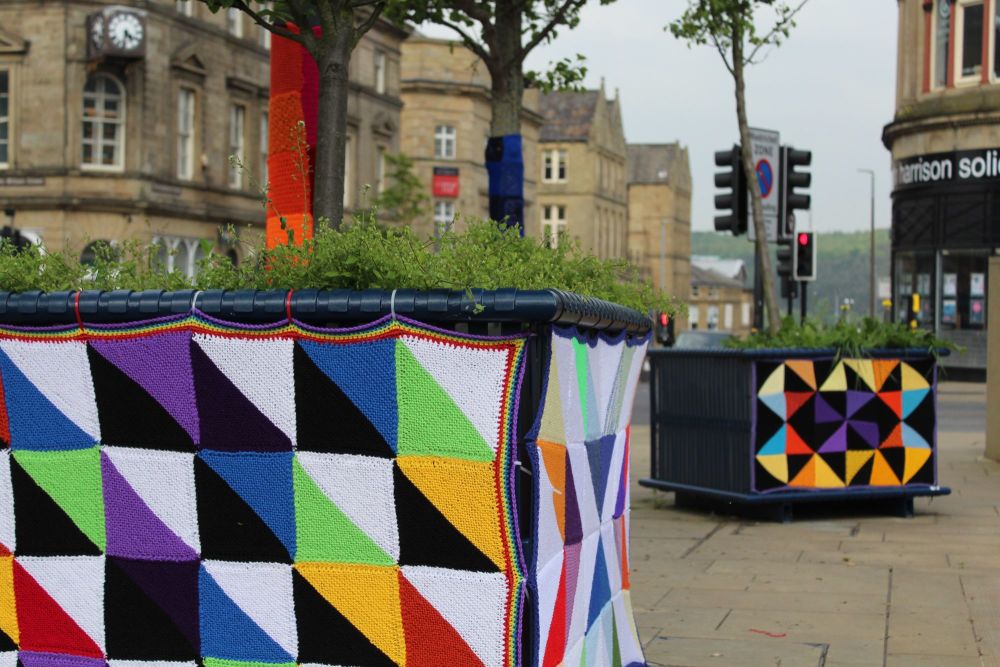 35 in stock.
0 in your basket
View Basket Checkout

Sandra was working on The Big Rainbow Knit 2021 project, being the creative designer for the Rainbow Rays.

After a public poll asking local people to vote for a landmark in Kirklees to yarn bomb, the iconic façade of Huddersfield Railway station was the outright winner.

Hundreds of people from across Kirklees, the country and the world – be they experienced wool crafters, complete beginners or somewhere in between – have been making individual, coloured squares that will be combined to create an epic Yarn Bomb installation!

Over 15,000 squares will be used to yarn bomb Huddersfield Train Station – that’s equivalent to around 45,000 hours of knitting and crocheting and over 75,000 yards of yarn!

That’s enough yarn to stretch from Huddersfield to York

Local knitting expert, Gail Smith created a design scheme to map out the rainbow of 7 colours across the 6 pillars and knitwear designer, Sandra Nesbitt has designed the series of Kaleidoscopic Rainbow Rays Panels that adorn the square, all using the donated squares.

Sandra has developed a series of patterns for interesting 2 coloured 6 inch squares using a variety of techniques. These cover intarsia, slip stitch/mosaic and fairisle patterns.

She shows and encourages a series of yarn bomb teams throughout Kirklees to design and create their own Rainbow Ray panels, inspired by quilting blocks with illusionary aspects.  The panels are created by bringing together a series of plain squared knitting and the 2 coloured squares that can be worked from her patterns.   The Rainbow Ray panels are documented in her ebook.

Sandra's inspiration for this piece of artwork

Recommend this to a friend  +